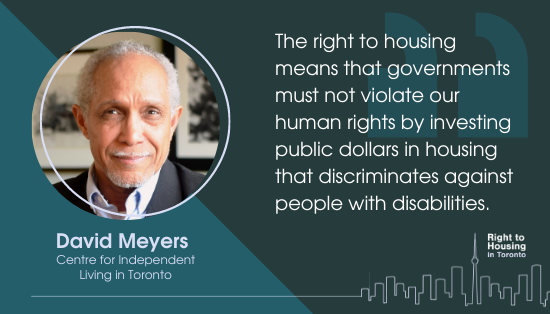 For me, the right to housing means that people across Canada have full access to affordable and accessible housing that meets their needs, as a protected human right, and adequately funded by all levels of government.

Twenty-two percent of Canadians have a disability. As a disability advocate, the right to housing also means that our governments do not violate our human rights codes and international agreements by investing public dollars in housing that discriminates against people with disabilities. Municipalities like Toronto would not be funding multi-unit housing developments in which 80% of homes are not built to universal design standards, preventing people of all abilities to safely live and age in place. Yet they are, as there is still no law in Canada requiring that housing be accessible. Meanwhile, most of Toronto’s over 400,000 residents with disabilities are disproportionately poor and live in public or private rental homes that are mostly inaccessible and deeply unaffordable.

What is the #1 thing that Toronto City Council must do to advance the right to housing next year?

Toronto City Council must vote for a much higher percentage of universal design (UD) units than the 20% percent outlined in its 2020-2030 housing plan. With our senior population set to double by 2041, 20% simply kicks housing accessibility further down the road.

Actions already recommended by disability stakeholders, such as the Accessible Housing Network, include the City setting a high minimum accessible unit standard, creating incentives that financially reward developer bids that exceed it, and favoring universal design excellence and innovation. The City must also actively engage with other jurisdictions that are proving that it is cost effective to build multi-unit housing with high UD standards. Engaging meaningfully with disability stakeholders with accessibility expertise is critical to inclusive solutions, and establishing the new Accessible Housing Working Group as part of the City’s Housing Secretariat is a small step among giant steps yet to take.

Tweets by @@R2HTO
Get our newsletter