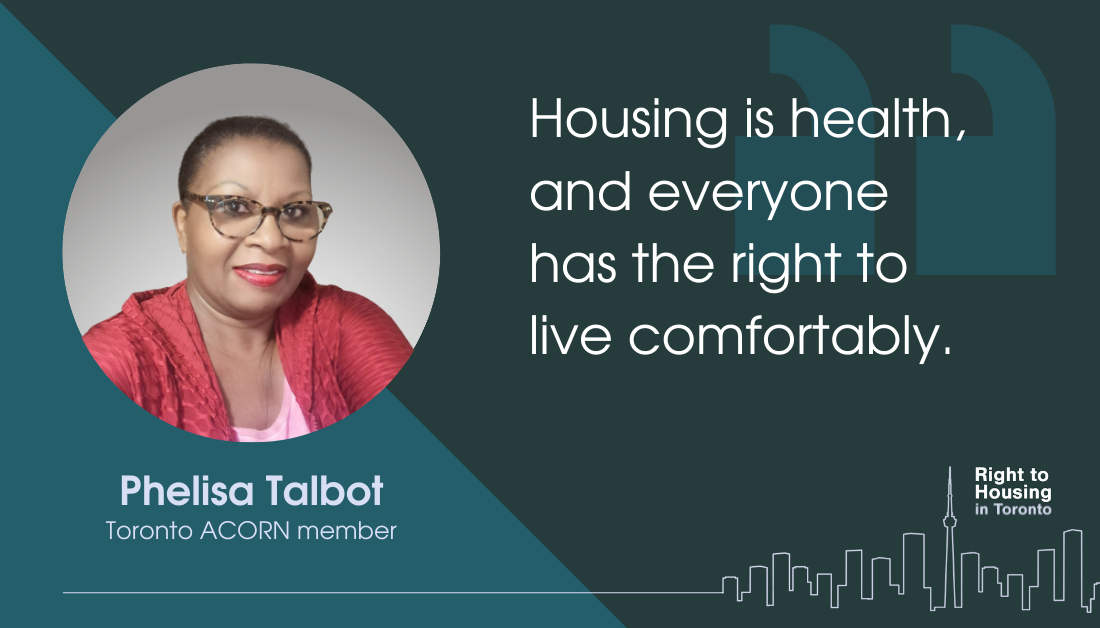 Two things come to mind when I think of the right to housing. Firstly, it means being able to live in a home that is free from pest infestations, paint cracking off the walls, drafty windows, and old broken down appliances. Secondly, it means having access to housing that is actually affordable for low- to moderate-income earners. Nobody should pay more than 30% of their income on shelter – yet, it takes me an entire month to be able to afford my rent.

Many of us are struggling to get by or are forced to live in conditions that put our health at risk. Housing is health, and everyone has the right to live comfortably. That’s why I joined ACORN in the first place, so I can fight to make the world a better place for everyone.

What is the #1 thing that Toronto City Council must do to advance the right to housing next year?

Toronto City Council needs to listen to the people who elect them. Too often low- and moderate-income families are pushed to the side for the rich. The City needs to enforce their own property standards and hold landlords accountable. For many years, ACORN has been fighting for landlord licensing, and we finally won the creation of RentSafeTO five years ago.

It’s been a struggle ever since then to get things that we originally demanded. Over 88% of tenants in Toronto wanted color-coded signs on their building that would act like a building rating system – just like DineSafe – with signs that clearly display the building’s rating and advertise 311 for any tenant issues. But Council voted against that two years ago.

There’s an important vote coming up in March to reverse this and we’ll be fighting to finally improve this program. Tenants deserve healthy and safe housing!

Tweets by @@R2HTO
Get our newsletter